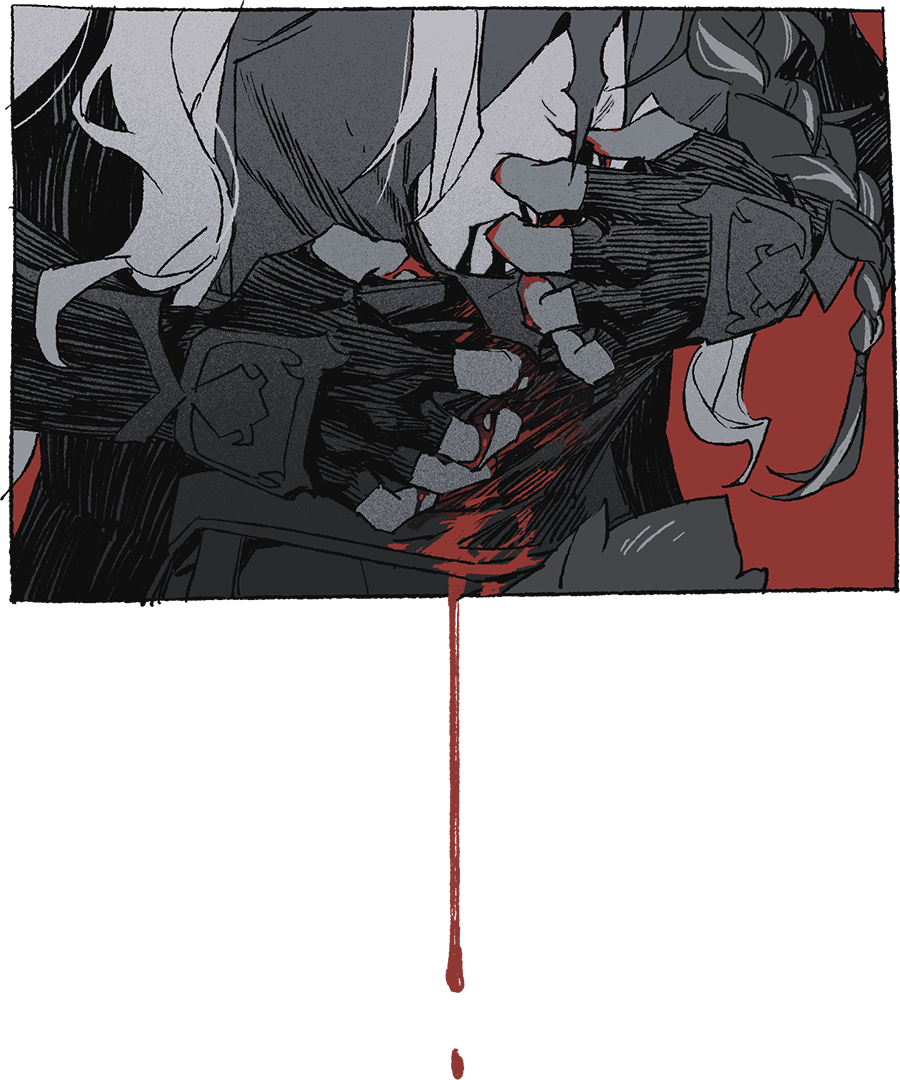 AT A GLANCE
Tal has a standoffish aura and is measured with their words. If asked, they will say they are a simple beast hunter. Stoic, but easy to fluster.In public and around people they don't know well, they are rarely unmasked. What little skin does show is marked heavily with scars.Their tail is bobbed. Hair and fur is streaked with gray.If seen in a fight, one would think they have a deathwish. Or are simply feral.THE OBSERVANT, OR FRIENDS WOULD KNOW
Hunter of beasts, they also hunt malicious voidsent, or the void-possessed. Though they swear each time that they're trying to quit the void-hunter business.They both crave and avoid fights. It has become harder and harder for them to control the bloodthirst that comes over them, that clouds their mind and inhibits their ability to know when to stop-- and in the worst cases, tell friend from foe.Their stoicism lends them an air of mystery, but under that façade they are just an impulsive idiot who's doing their best not to let people know how much of a disaster they are. They're an awkward mess around others or in any social setting, and cope with this by trying to be inaccessible. Despite crafting their appearance to be intimidating, their heart bleeds easily and they covet a secret collection of monster romance fiction. A complete dork.TLDR

A HUNT
If you're troubled by a beast or voidsent, Tal would eagerly help. They have a bleeding heart, so they are more deeply motivated by genuine trouble than simple coin, but like all they do have bills to pay.MERCENARY WORK
Tal does accept generic merc work on occasion, as long as it doesn't conflict with their morals. They've taken escort and guard work before, along with more menial physical labor jobs when in a financial pinch. They know the land well due to how much time they spend tracking their prey, so they might actually make an excellent guide.ANIMAL COMPANION/PET
If you travel with a pet, they will be automatically drawn to it. They are the awkward nerd at a party who just spends the whole time petting the dog or cat.HEALTH
Tal has permanent lung damage that requires the aid of a respirator when they exert themselves. They also in general just take lots of injuries due to their self-destructive style of fighting, so if you're someone who can patch them up, they probably almost always will be in need of it.RIVAL
While they do their best to do good, they're not above making mistakes or enemies. Are you voidsent? Tal's relationship with voidkin are complicated at best, and you may sense the familiar scent of one of your own on them...

▫ Tal is Trans/Nonbinary and so am I. I have no tolerance for transphobia or homophobia.▫ I am 21+, and feel most comfortable when writing partners are as well.▫ I am most interested in mature and dark themes, though I am down for a lot of different kinds of RP as long as we communicate clearly OOCly first! For mature themes, I absolutely require the consent of all involved.▫ All of the artwork on this page is by me. Thanks for taking the time to read about my catte!